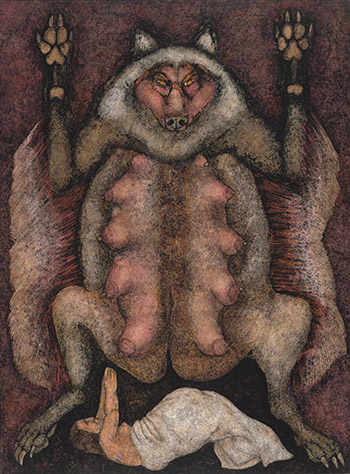 Meinrad Craighead has spent her life exploring in art the human-divine relationship, particularly in images of God as the Great Mother. Her work portrays in vivid color both an active visual dialogue with God and a keen sense of the brooding, watching, beckoning power she finds in the land around her, in the sky above, the earth below, in the animals, in our dreams. One critic called her art “vast landscapes of interconnectedness.” Another wrote: “Her detailed pieces teem with images and concepts from Catholic spirituality and ancient mythologies, blended in visceral lunges or relentless flows. All art for Meinrad is prayer, a continual supplication for vision.”

Her Catholic upbringing, Craighead has said, nourished her imagination through its ritual and ceremonies, its candles, incense, psalms, and litanies. Yet her first real religious experience, at the age of 7, was not in the church but in nature, with her dog. She had retreated from the heat of a summer day to the shade of some hydrangea bushes. Under the flowers’ blue dome, she found herself gazing into her dog’s eyes. “They were as deep, as bewildering, as unattainable as a night sky,” she said of the eyes, and as she stared she felt a rush of water coming from deep within her. “I listened to the sound of the water inside, saw a woman’s face, and understood: This is God. Because she was a force living within me, she was more real, more powerful than the remote ‘Father’ I was educated to have faith in. We hid together inside the structures of institutional Catholicism. Through half a lifetime of Catholic liturgies, during school years, in my professional work as an educator, for 14 years in a monastery, she lived at my inmost center, the groundsill of my spirituality.” 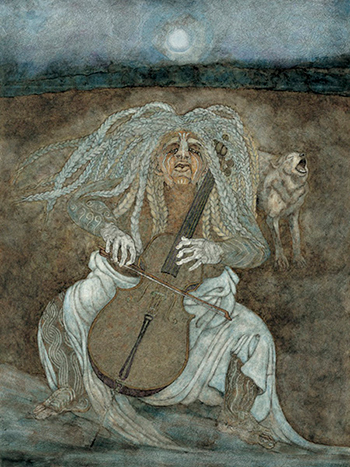 Subjects in Craighead’s work range from the visions of the Catholic women mystics to images of the Rio Grande, scenes from the psalms and the “Song of Songs,” figures from Greek and Norse mythology, Native American animal and divine spirits, wise grandmothers, angels clicking castanets, otherworldly beings. There are also women giving birth in a variety of ways, self-portraits, menstrual blood, icon-like scenes featuring dogs, crows, flickers, coyotes, magpies, turtles, and owls.

Religious art portrays in tangible form the awe, wonder, and mystery of our human encounter with the divine. In Craighead’s work in the visual arts, nature, myth, and the Catholic spiritual tradition all mix in a body of work that is enigmatic, illuminating, and deeply nourishing.

From an article by Rich Heffern in the National Catholic Reporter.

Meinrad Craighead, visionary artist, writer, and teacher, died in Albuquerque, New Mexico, on April 8, 2019. She was 83. 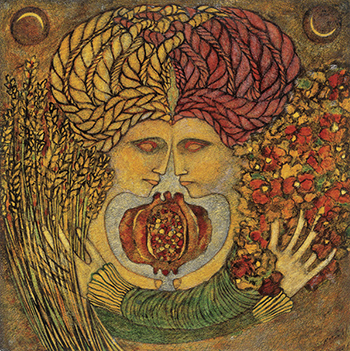 Craighead was a classically trained artist who pushed both the boundaries of the mediums she worked with and the confines of her Catholic heritage. She explored feminine faces of the Divine and the numinous gifts of the natural world, with particular attention to sacred trees and animals, both wild and domestic. Published books of her images and writing include The Sign of the Tree (Artists House, 1979), The Mother’s Songs: Images of God the Mother (Paulist Press, 1986), and The Litany of the Great River (Paulist Press, 1991). A retrospective of her work, Crow Mother and the Dog God, was published in 2003 (Pomegranate).

Meinrad Craighead was born Charlene Marie Craighead on February 12, 1936, in North Little Rock, Arkansas. Her family moved several times during her childhood, from North Little Rock to Chicago and then to Milwaukee. The first move meant a departure from Craighead’s beloved maternal grandmother; this split, and the many summers she returned to visit her “Memaw,” would become defining experiences in Craighead’s life, infusing her visual artwork and her writing with elements of loss, longing, memory, searching, journeying, and reunion.

Craighead received a BA from Clarke College in Dubuque, Iowa, in 1958. She spent a year abroad in a rebuilding, post-WWII Europe, studying art and architecture and encountering music, museums, and the rich imagery of ancient Catholic Europe. “It proved to be a year of feverish awakenings and premonitions, which coursed through the rest of my life,” Craighead later wrote.

She returned to the United States and received her MFA at the University of Wisconsin, Madison in 1960, with a concentration in printmaking. Craighead spent the early 1960s in Italy and Spain, first teaching and then traveling on a Fulbright grant. In 1966 she made her first visit to the Benedictine monastery of Saint Meinrad, in Einsiedeln, Switzerland, to visit the Black Madonna and the grave of her great uncle, a monk (Brother Meinrad Eügster, 1849–1925).

The experience would have a lasting impact on Craighead’s work and her very identity, as “Meinrad” would become her religious name when she entered Benedictine monastic life at Stanbrook Abbey in England later that year, at the age of 30.

Craighead lived, prayed, and worked at Stanbrook for 14 years. Granted time and space to continue with her art practice, she created prints notable for their modern reflection on timeless Catholic themes. The wide dispersal of her hand-printed images through the monastery’s gift shop secured her place in contemporary religious art, and earned her a devoted following that grew steadily, even as her work shape-shifted over the decades.

In 1980 she left monastic life, a difficult decision reached after a series of intense dreams and much contemplation. Shortly thereafter she began work on the paintings that would be published in The Mother’s Songs: Images of God the Mother. 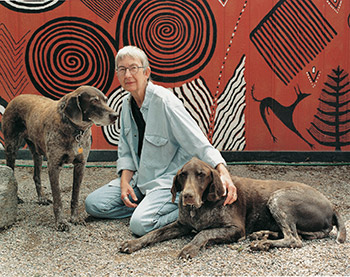 Meinrad Craighead and her dogs

Craighead returned to the US and settled in Albuquerque, where she built a studio near the Rio Grande and began a new life of solitude and contemplation. This period included a 22-year relationship with a family of German short-haired pointers, often depicted in her paintings. Her relationship to the land and water in New Mexico, and her affinity for local Native American mythologies—particularly the animal dances of the various Pueblos—filtered into her work.

Her images, often figurative but increasingly abstract in later years, are cross-cultural hybrids: the dark-faced Crow Mother of the Hopi meets and mirrors the Black Madonna of European Catholicism, as a wide array of animals bound into and through the pictures, or hover at the edges.

“Since 2000, she has worked in opaque watercolor in a style that can only be called ‘animal,’ and she has produced some of the most powerful images of her career,” wrote art critic Eugenia Parry in her essay “Animal Magnetism,” published in Crow Mother and the Dog God.

For many years, Craighead ran creative retreats for women, which offered an amalgam of art history, time for creative image-making, and ceremonial work for small groups. Women traveled from all over the United States for these intimate gatherings in the spare beauty of New Mexico.

In 2009, the hour-long documentary Meinrad Craighead: Praying with Images was produced by the Resource Center for Women and Ministry in the South, and Minnow Media. Amy Kellum, executive producer, noted that “working and traveling with Meinrad were among the most interesting and rewarding times of my life. She was a natural teacher, able to easily relate information in a most generous way. She changed the way that I see and relate to God. For that I am eternally grateful.”

Craighead’s last body of work, The Mystics, was completed in 2009. As age and a faltering memory encouraged her retreat from public life, her work burned more brightly than ever. Craighead’s works are held in private and public collections around the world, including the University of New Mexico, Albuquerque. Her papers are archived at the Sallie Bingham Center for Women’s History and Culture in Duke University’s Rubenstein Library.