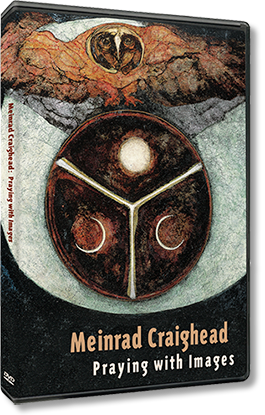 A documentary about artist and teacher, Meinrad Craighead: Praying with Images tells the story of Craighead’s artistic and spiritual pilgrimage which began in her native Arkansas, where her greatest influences were the Catholic Church, the natural environment, and her grandmother who encouraged her to draw and paint.

The documentary includes nearly 100 of Craighead’s paintings, shown in beautiful detail. Viewers will see images that have flowed from her dreams and visions of the Divine Feminine over the last 50 years, experience her moving images and stories of the devastating 2003 bosque fire, and travel with her on a recent pilgrimage to visit her beloved Black Madonna of Montserrat in Spain.

“If I didn’t paint,” Craighead says, “I wouldn’t know where I am in the world.” Her truly original art spans time and distance and tradition to combine imagery from Catholicism, Native American shamanism, and ancient mythology. Add to the mix her own dreams and mystic visions and the result is a unique synthesis of energy, color, and connectedness.

DVDs of Praying with Images can be purchased from the Meinrad Project web site.

You can stream (rent or buy) Praying with Images on Vimeo.

Beginning in 2002, I started following Meinrad around the country and videotaping her lectures. That same year, I also filmed one of her four-day workshops in Albuquerque. For years, I’ve wanted to make these widely available, but it’s a huge undertaking. We have nearly 50 hours of audio and video tape and hundreds of slides to work on. But we have begun! We have engaged a professional to edit the tapes into viewable segments.

To create this segment, we took audiotapes from Meinrad’s 1992 lectures at the Journey Into Wholeness conference and added the images that she is describing. It is thrilling to hear Meinrad speaking again–describing her own work and exploring the Feminine Divine throughout history.

In the future, we will be posting lectures that Meinrad offered during her recurring four-day workshops in Albuquerque. She called these workshops “Praying with Images.” In the lecture you can now access, Meinrad concentrates on the process and content of her own artwork. Future lectures will focus on her extensive travels and knowledge of the Divine Feminine. I’m very excited that we will be able to share her wonderful ideas with our weary world.

I hope that after watching the first segment you will want to see more. You can ensure that there will be more by making a gift to the Meinrad Craighead Project. You made it possible for us to make the Praying with Images documentary. Please help us share Meinrad’s lectures with the world.

To make a contribution, send a check to RCWMS, 1202 Watts St., Durham, NC 27701 with “Meinrad” on the memo line. Or give online at www.rcwms.org. Click the Donate button and select Meinrad Craighead Project from the Designations.

Thank you. I hope you will enjoy hearing Meinrad again as much as I have!  In the future we hope to have closed captioning to make her words clearer.